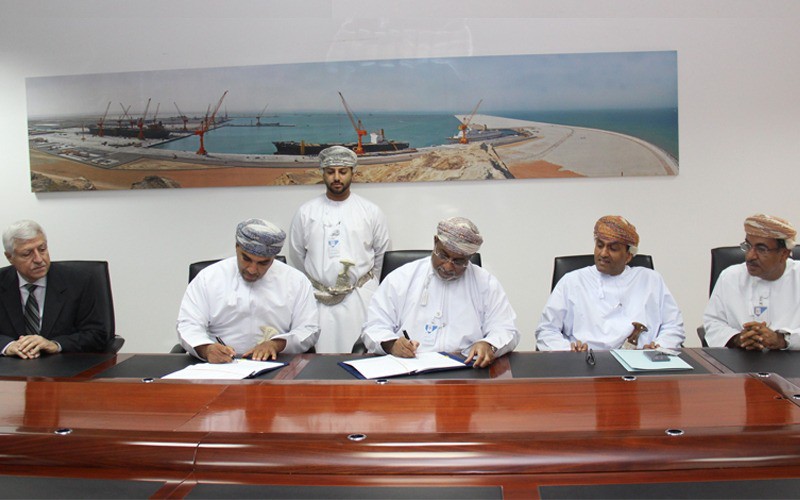 His Excellency Yahya bin Said bin Abdullah Al Jabri , Chairman of Board of Directors of the Special Economic Zone at Duqm on Thursday (May 9th, 2019) , signed six (6) agreements in the field of infrastructure for the  special economic zone of Duqm; he has signed an agreement with Al Bustan Construction Company for the implementation of land leveling works in the logistics area (A) Port of Duqm , and an agreement with A.A.W. and Partners Consulting Engineers  in order to provide consultancy services for design and supervision of the execution of the internal roads project in the Rocks Garden, and an agreement with. Conser & Partners Engineering Services LLC to provide consultancy services for the design and supervision of the implementation of the second package of the dual carriageway road project of Sultan Saeed bin Tiamor (National Road No. 32 in Duqm).

His Excellency also signed an agreement with the National Engineering Office to provide consultancy services for design and supervision of the implementation of a road linking between Duqm airport to the Ra's Markaz.

The signed agreements included also design and constructing of sewage treatment plant in Duqm, which will be implemented by Lal Bakhsh and Voltas Engineering and Trading Services Company. Meanwhile, His Excellency the chairman of the Board of Directors of the special economic zone at Duqm signed an agreement with Grand Enterprises Co. for management, operation and maintenance of lighting posts in Duqm, whereas the agreement provides that a store will be established for maintaining the equipment and tools for the project.

The agreement signed with Al Bustan Construction Company provides for leveling of land in the logistics area (A) located in Duqm port with an area of 5.5 hectares. The project is considered the second stage whereas the first phase started by leveling 65 hectares of the land in the logistics area in Port of Duqm, with a total area of about 1,000 hectares. The logistics zone is witnessing an increasing demand from investors due to its proximity to the commercial pier at the Port of Duqm.

The project is scheduled to be completed within 110 days.

The internal roads in the neighborhood rock garden

The agreement signed with A.A.W. and Partners Consulting Engineers envisages the implementation of the design and supervision works for internal roads with a length of (13) km linking to the parking areas (34000) square meters in the rock garden district of Duqm, which is one of the new commercial neighborhoods in the Special Economic Zone at Duqm and is witnessing an increasing demand from investors to construct commercial and residential buildings in the area.

The agreement signed with Conser & Partners Engineering Services LLC provides for consultancy services for the design and supervision of implementing the second package of the dual-way Sultan Said bin Taimor Road, with a length of 14 km.

The design services will be implemented within 10 months while the supervisory services will take 30 months in addition to two weeks for preparations.

The Road from Duqm Airport to the Ras Markaz

Signing of the consultancy services agreement for the design and supervision of the implementation of the road project linking Duqm Airport to Ras Markaz comes to cope with the expected growth in the region  especially after establishing the oil storage plant at Ras Markaz which will link be linked to the transfer line to transport the crude oil from the storage plant to Duqm refinery with a length of 80 km.

The planned road extending from Duqm airport to Ras Markas is 51 km.

The design services will be carried out within 10 months while the supervisory services within 48 months, plus one month of preparation.

The signed agreements included the design and construction of sewage treatment plant in Duqm. According to these agreements, the company executing the project will perform the works of designing, engineering, construction, installation and commissioning of equipment, operation and delivery of the station as per the approved specifications. The first phase of the station has a capacity of 2500 cubic meters per day. It operates by a Sequential Batch Reactor (SBR). The plant will be executed within 24 months from the date of awarding.