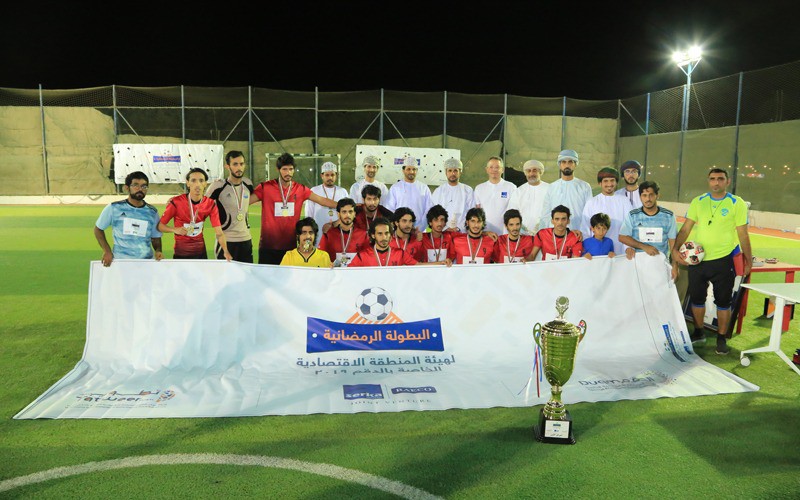 The 2nd Ramadan Tournament held in SEZD witnessed a fierce competition between 16 teams from companies working in SEZD and the local teams in the governorate.

The tournament was organized by SEZAD Partnership & Development Directorate in collaboration with Serka Taahhut Insaat A.S. and Tatweer Duqm Company, the Tournament drew a considerable societal attendance and interaction.

Duqm youth team won, for the second consecutive time, the championship cup, after beating in the final match with one clean goal the competitor Al Shuwaier youth team.

In the conclusion of the tournament Dr. Ismael bin Ahmed Al Balaushi; the acting CEO of SEZAD has honored the three winning teams:  Duqm Youth Team; the first place winner, Al Shuwaier Youth team the runner, and SEZAD Youth Team (B), came in the third place, after the withdrawal of Hitham Youth Team from competing for this position. The sponsor has also honored the supporting companies, the organizers and the contributors on their contributions to make this tournament successful.

It is worth mentioning that SEZAD is extremely eager or interested to organize such activities during the holy month of Ramadan as part of its Ramadan plans and programs that aim at supporting such activities, sport cultural and youth contests, in addition to the realization of communications and synergy between the organizations working at the region and the local community.