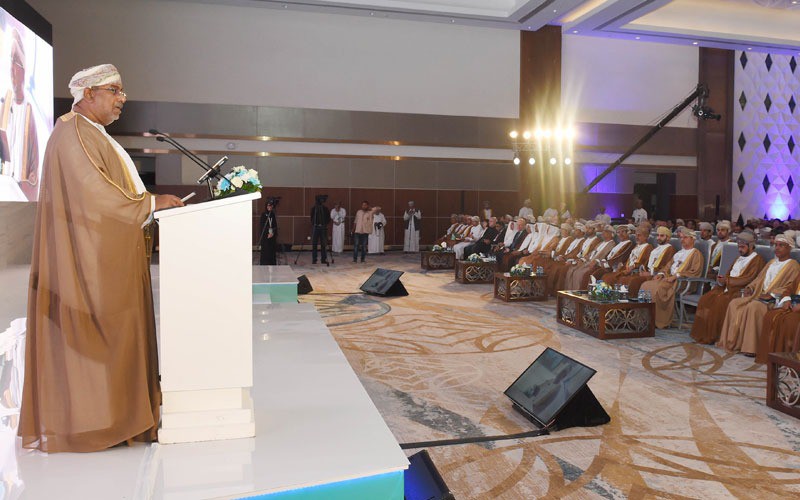 This was part of his speech at the opening of the Fourth "Duqm ... Society and Economy" Forum organized by SEZAD in cooperation with the Oman Chamber of Commerce and Industry (OCCI), Al-Wusta Branch, under the theme "Smart Cities Economy."

Al-Jabri indicated that SEZAD has developed a geographical information system (GIS) in SEZD through which digital conversion, archiving and analysis of all geographical information, including organizational schemes, various development sites, and infrastructure corridors, such as roads, electricity, rain water drainage take place. It also launched a mobile smart application to activate communication between SEZAD and citizens and visitors.

Al-Jabri noted that the development of information and communications technology (ICT) in the past years has contributed to the realization of a global qualitative shift not only to this sector, but various economic sectors and social life, and excellent therein has become became the key to success and economic growth.

"Our quest to employ modern technology in various areas of economic and social life in Duqm will contribute to attracting more investments to SEZD, which we are endeavoring to make an essential option for investors," added Al-Jabri.

The Forum, held under the patronage of H.E. Sultan Bin Salem Al-Habsi, Deputy Chair of the Board of Governors of the Central Bank of Oman, saw the attendance of a large number of specialists, experts and those interested in the Smart Cities sector.

Salim bin Sulaiman Al-Junaibi, Vice Chair of the OCCI for Economic Affairs and Branches in Al-Wusta, said that the focus of the Forum on the economy of smart cities was to promote technology in the business sector and investment projects and to contribute to the development of the first building blocks of intelligent cities platforms in the Sultanate.

In his presentation, Saleh Al-Hasani, Director General of Investor Services at SEZAD, reviewed the most important investment opportunities in SEZD and SEZAD role in attracting investments.

The participating experts provided their visions on smart cities. Brett King, founder and CEO of Moven Company, indicated, "Artificial intelligence (AI) makes communication and information technology services more flexible, efficient and sustainable. The use of information technology, digital technology and telecommunications services contributes to the provision of highly efficient public services and improves resource utilization. Smart cities aim at developing many areas, the most important of which are infrastructure and public services."

Sandy Lowe, Vice CEO of Occidental International, reviewed the company's latest digital technology in the oil extraction process, explaining that these technologies are part of the company's plan to introduce AI into all its operations.

The Forum workshops touched upon a number of initiatives in the smart city industry, and also reviewed international experiences for a number of smart cities, including Taipei City in Taiwan, the British city of Bristol and Songdo city in South Korea.

The workshops discussed the future trends of the banking and financial technology industry and AI and alternative energy production, future of the industry and logistics sector.

On the sidelines of the Forum, a small and medium enterprises (SMEs) innovation exhibition took place focusing on the smart and digital applications and innovations offered by SMEs. There were also an exhibition of Korean companies specializing in smart city technology and an exhibition for the sponsoring companies.