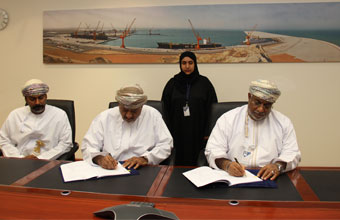 H.E. Yahya bin Said bin Abdullah Al-Jabri, SEZAD Chair, signed the agreement on behalf of SEZAD, and Mr. Ali bin Mubarak Al-Matar, Executive Director of the implementing company, Al-Matar Trading and Contracting, signed for the second party. The implementation of the project shall be within 548 days plus 30 days for preparations

The project of OMR 2.3 million aims at delivering potable water to several sites and investment under construction and future projects in SEZD, notably the zones of Light Industries, Heavy Industries, Medium and Light Industries and Rock Garden.

According to the agreement, two water tanks with a capacity of 500 m3, water pumping stations, and valve chambers shall be built along with the supply and installation of valves, connections to the existing water network, testing pipeline and accessories, and operation of the pipeline after construction. The length of pipelines under this agreement is about 17 km.