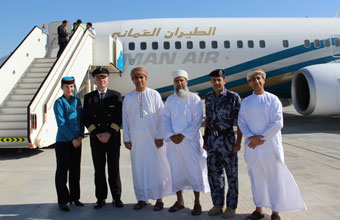 The Special Economic Zone Authority in Duqm  (SEZAD) and Oman Air today announced the operation of Boeing 737-800 on Muscat – Duqm route to avail additional seats to passengers. The flight using Boeing 737 will be operated every Sunday and Thursday. The flights on Monday and Wednesday of each will be on Embraer 175.

Shaikh Khalil bin Ahmed al- Salmi, Deputy CEO at Oman Drydock Company said that the route, which will increase the number of passengers to SEZD, comes in a bid to keep pace with the growth witnessed by the region.

On his part, Wahad Saud al- Harthy, Director of Capacity at Oman Airports Management Company said that during the past period, the company took all necessary measures to facilitate the traffic of passengers through A'Duqm Airport using this type of aircrafts.