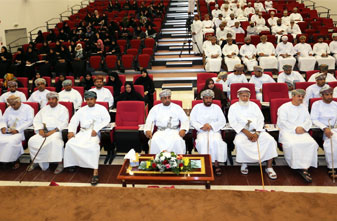 The Duqm Special Economic Zone Authority (SEZAD) held on Monday (23 Feb 2015) in Al Batinah South Governorate the second introductory seminar, which is part of a series of seminars that SEZAD is organizing in cooperation with Oman’s Chamber of Commerce and Industry in different governorates as a part of SEZAD efforts to encourage the private sector to invest at Duqm.

The seminar was held at the technical college in Al Mussanah under the patronage of H.E. Al Sheikh Hilal bin Said Al Hajri the Governor of Al Batinah South Governorate.

In his speech, Ismail bin Ahmad Al Balushi Deputy CEO in SEZAD said that SEZAD invites the Omani private sector to benefit from the investment environment and the privileges and facilities and benefits that SEZAD offers to investors, emphasizing that this call is not limited to major corporations only but also includes small and medium enterprises.

He added in his speech at the beginning of the seminar that SEZAD is working to implement the government’s strategy to increase the activities of these enterprises and to provide them with the necessary space to grow. In this regard, SEZAD had signed last year an MoU with the Public Authority for SME Development, that regulates the cooperation between the two organizations to provide industrial and commercial lands for SME owners to invest in it according to usufruct contracts.

He also noted the local investors demand to invest at SEZD, and he said that last year has seen the signing of usufruct agreements and development agreements with local investors that intend to set up a number of projects in the commercial, industrial, sports and entertainment sectors which raised the investments at SEZAD to more than R.O 300 million, which is a good number that we are proud of, however, we seek more local investments in SEZAD, referring to the fact that the Royal Decree No. 79/2013 ,issuing the System of the Special Economic Zone at Duqm. This included many privileges and facilities that were prepared to meet the aspirations and expectations of investors and raise the level of competition at SEZAD.