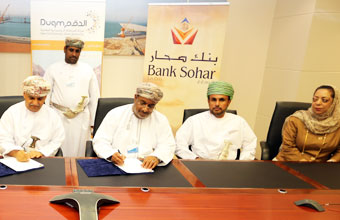 H.E Yahya bin Said bin Abdullah al Jabri, Chairman of the Special Economic Zone Authority of Duqm (SEZAD) signed today, in his office at KOM, an MoU with Bank Sohar that stipulates facilitating the access of required finance by investors and companies that wish to set up their venture at SEZAD.
This is the second MoU signed by SEZAD with local banks to facilitate the access of required finance for investors to set up their ventures in Duqm Special Economic Zone after the first memorandum that SEZAD signed with the National Bank of Oman last July. SEZAD seeks to attract investors to invest in Duqm Special Economic Zone through signing MoUs with local banks. In addition, SEZAD will sign in the coming period a number of similar MoUs with the rest of the local banks to provide the finance the companies need especially the SME\\'s sector.
H.E. Yahya bin Said bin Abdullah al Jabri, confirmed that SEZAD is working to encourage the investment in SEZAD through a number of mechanisms including singing MoUs with local banks to provide the required financing that investors need to set up their ventures.
H.E. expressed in a press statement his hopes that the MoUs SEZAD is signing with the local banks would encourage local investors to localize their projects at SEZAD, pointing out that financing is one of the challenges that investors face, which SEZAD seeks to overcome through the signing of a number of MoUs with local banks which will contribute in attracting various investments and to achieve the goals of SEZAD in diversifying the sources of national economy.
H.E. said that SEZAD is working to create an advanced and encouraging investment environment to local and foreign investors through a package of advantages, incentives and facilities that the Royal Decree stated (79/2013) to issue the system of SEZAD.
The MoU stipulates the cooperation between SEZAD and Bank Sohar to facilitate the required financing by investors who wish to set up their ventures in SEZAD. According to the Memorandum, SEZAD will present the offers provided by Bank Sohar to potential investors at SEZAD.
For his part, the Chairman of the Board of Directors of Bank Sohar Abdullah Bin Humaid Bin Saeed Al Mamari expressed his happiness over signing the MoU with SEZAD, and said, \\'We are pleased to start cooperating with SEZAD to finance the projects that are being set up at SEZAD while looking forward to become part of the success story that is happening at Duqm.\\'
\\'We are looking forward to contribute in SEZAD achieving its goals in diversifying the national economy and to support the economic and social development in Al Wusta Governorate and all the other governorates in the Sultanate\\' Al Mamari added,
He confirmed that Bank Sohar shall provide all facilities required to enhance the investments at SEZAD and the financing the investors seek. He also said that the bank would harness all its expertise to achieve this goal through providing the best banking services to the companies that are planning to establish their business at SEZAD confirming that Bank Sohar shall provide special offers to SEZAD as well as all the companies that will apply through SEZAD.

Bank Sohar, as per the MoU will provide several services to the investors. In the field of Corporate Banking, the bank will provide different types of financing that the companies need, and make different types of loans and bonds available, Term Loans, Mortgages, financial and investment consultations of all kinds, electronic banking, corporate credit facilities and many other services. The MoU also includes banking for SMEs, and Islamic window business.