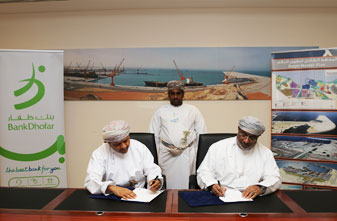 This signing falls within the efforts of the Authority to encourage the private sector to invest at SEZAD and to overcome the challenges that investors face, especially the SME’s sector. This is the third MoU that SEZAD signs with local banks as two similar MoU’s were signed previously with the National Bank of Oman and Bank Sohar. SEZAD’s plan includes signing similar MoU’s with local banks in the coming period.

H.E. Yahya Bin Said Bin Abdullah Al-Jabiri praised the efforts being made by local banks in financing the projects that are being set up at SEZAD. H.E. also said that these efforts would contribute to realizing the vision of the Sultanate to develop the Al-Wusta Governorate and to make the region one of the pillars of economic diversification. He expressed his hopes that these MoU’s would encourage investors to establish their enterprises at SEZAD.

H.E. Chairman of SEZAD said in a press release that SEZAD is working to create an advanced and conducive investment environment for local and foreign investors through a suite of advantages, incentives and facilitations that were listed under the Royal Decree (79/2013) issuing the regulations of the Special Economic Zone at Duqm.

On his part, Abdul Hakeem Omar Al Ojaili Acting Chief Executive Officer of Bank Dhofar expressed his pleasure to sign the MoU with SEZAD saying "We are happy to cooperate with SEZAD to finance the enterprises that are being set up at SEZAD, and we are committed to provide financing to investors who need funds to set up their projects with affordable terms.

He added, Bank Dhofar is keen to contribute to the development that the Sultanate is witnessing and the Bank has financed several major projects in the previous years. He reiterated Bank commitment to continue its efforts to finance different projects in the Sultanate and to provide many facilities to investors and companies who wish to invest at SEZAD.

MoU states the joint cooperation between SEZAD and Bank Dhofar to facilitate the investors receiving financing for their projects at Duqm. According to the MoU, SEZAD will present the offers it will receive from Bank Dhofar to the investors, companies and institutions that wish to invest at SEZAD.

Bank Dhofar, according to the MoU, will provide several services to investors. . In the field of Corporate Banking, the bank will provide different types of financing that the companies need, and offers different types of loans and bonds, Term Loans, Mortgages, financial and investment consultations of all kinds, electronic banking, corporate credit facilities and many other services. The MoU also includes banking for SMEs, and Islamic window business.