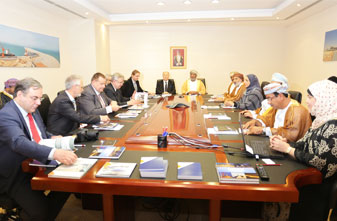 H.E. Yahya bin Said bin Abdullah Al Jabri Chairman of the Board of Directors of the Special Economic Zone Authority at Duqm today (3 December 2014) welcomed in his office at KOM, a Parliamentary Friendship Delegation of the Polish senate headed by Senator Michal Sewerynski

Bilateral relations between the Sultanate of Oman and the Republic of Poland were discussed during the meeting especially in the economic, investment, and available investment opportunities for businessmen, and the role that the Parliamentary Friendship Delegation can play in strengthening cooperation between the two friendly nations.

H.E. Yahya bin Said bin Abdullah Al Jabri, during the meeting, presented an overview of the potential of the Special Economic Zone in Duqm (SEZD) and the advantages the Zone has and the incentives SEZAD offers to investors and the projects that are currently being set up in the Zone.

H.E. confirmed that SEZAD welcomes Polish investments, and said that we are looking forward to have Polish investments in SEZD, pointing out that the Zone is characterized by the presence of eight investment areas, which helped attracting different investments. H.E. added that the investment environment at SEZD has encouraged local and foreign investors to set up their enterprises.

On his part, Senator Michelle Swarnski, Head of the Parliamentary Friendship Delegation, complemented the renaissance that the Sultanate of Oman is witnessing, and said that I have noticed during my visit to the Sultanate a massive progress in different fields that reflects the efforts spent to achieve the welfare of the people, praising the parliamentary experience of the Sultanate.

SEZAD presented a presentation during the meeting about the projects that are being implemented in the Special Economic Zone in Duqm and the available investment opportunities and the incentives SEZAD offers to investors.