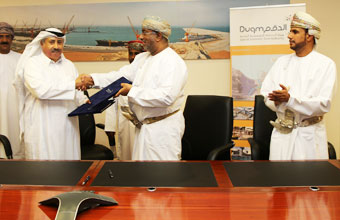 The first agreement was signed with the Rural Areas Electricity Company for setting up a project for electricity transmission and distribution at a number of SEZD sites. The agreement aims at providing power to the projects that will be set up at SEZD and meet the growing demand for power in Duqm in the coming years.

The second agreement, with Polymer Experts Company, for the construction of polymer production plant at the Heavy Industries Complex. Polymer is a raw material for many industries such as adhesive and construction materials, paper, fabrics, fibers, ceramics and others.

The fourth agreement was signed with Ramiz Shopping Center for setting up a commercial center and hypermarket that aims at meeting the needs of residents for foodstuff and consumable goods. The Center will stretch over 22,000 square meters. The project is part of the expansion plan by the Center after the growth it has witnessed in a number of governorates in the Sultanate.
The fifth agreement was signed with Oman Sport and Real Estate Investment Center and is related to the construction of a bowling center and providing recreational and entertainment services.

The sixth agreement signed with Amit Warehouses and Logistic Services is related to setting up a number of warehouses for foodstuff as well as exported and imported items.

The seventh agreement with Muscat Pharmacy is related to setting up 10 stores to meet the needs of SEZD for medicines and medical supplies.

The eighth agreement with al Nabaa Holding Company set up to construction of workshops, stores, buildings, office and business spaces over about 24,000 square meters.

The ninth agreement with Khimji Company is related to the construction of a commercial mall that include a number of international brands.

As per the agreements terms, SEZAD will provide these companies with usufruct rights for the lands on which the projects will be set up.

H.E Yahya bin Said bin Abdullah al Jabri, Chairman of SEZAD said that the agreements reflect the confidence of the private sectors and investors in the prospects of Duqm. He hailed the efforts done by SEZAD over the past period to promote the available investment opportunities in the Zone.

"The new projects will be a valuable addition to the Zone which has become an eyespot for many local and foreign investors, al Jabri said in a statement to reporters after signing the agreements.
He pointed out that the diversity in projects is an evidence of the great prospects of the Zone and its ability to attract different investment. At the same time, these investments meet the growing needs from the Zone as well as from the residents.

Royal Decree No. 119/2011 has provided the legislative and institutional framework for the development of the Willayat of Duqm to attract foreign investments. The Authority implemented a plan to make the Zone a hub for the diversification programs. SEZAD provides several incentives to economic projects such as exemption of custom duties on imports and exports, tax-exemption for 30 years from the date of starting business renewable for 30 years, usufruct agreements up to 50 years renewable for similar periods, 100% foreign ownership, No minimum capital requirement, no project may be nationalized unless through a law and against fair compensation, free repatriation of profits & capital , freedom to import all types of goods except the legally banned imports or those that require prior approval or those classified as explosives or chemical products. To import such products, investors should abide by the laws and regulations in force.

Al Jabri thanked the companies for selecting Duqm as the host of their projects and affirmed that the Authority will provide them with the facilities they may need to turn their projects into reality as per the terms of the usufruct agreements signed with them and as per the Zone system issued by the Royal Decree No 79/2013.

It is worth mentioning that SEZD , which stretches over 1745 km, is divided into 8 main areas that comprise the dry dock, the port, the petrochemical industries complex, the fishing marina, the fish-processing complex, the tourist, residential and business area, and the logistic center and Duqm airport.