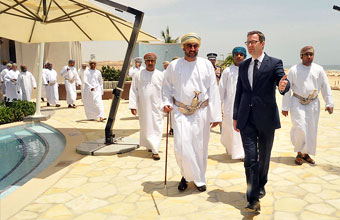 His Highness Sayyid Taimour bin Assad al Said, Assistant Secretary General for International Relations, The Research Council officially opened the Crowne Plaza Duqm Hotel in the presence of chief executives of Omran and public and private companies as well as international organisations.
Built at a cost of RO 17 million, the 4-star hospitality project aimed at carving a niche in tourism for the coastal area and to attract more local and foreign investment to the Sultanate\'s fastest growing economic hub has had a soft opening last year following which many companies considered this central Oman area for their commercial operations.
\'It is a timely initiative and the coming days will witness a substantial boom in tourism as well as investments\', said His Highness Sayyid Taimour to the Observer. He added: \'With Duqm being positioned as the MENA region\'s most accomplished industrial and economic stronghold offering a world-class multi-business and commercial proposition, the wilayat requires high quality hospitality infrastructure capable of supporting increased demand and Omran has taken a major step towards the national goal\'.
The first of its kind hotel features 213 guest rooms, including 16 junior suites, two 1-bedroom suites, two 2-bedroom suits, and one royal suite, and offers a range of dining facilities, a fitness centre, swimming pool, business centre, ballroom and meeting and conference facilities.
\'No doubt, opening of tourism properties such as the strategically placed Crowne Plaza Duqm will complement the expansion of Oman\'s economic diversification centrepiece, enhance the wilayat\'s tourism potential and ensure the availability of sufficient accommodation for discerning business and recreational travellers\', His Highness added.
\'What has so far been missing in Duqm is the accommodation to attract investors and hence we have invested in two hotels, the City Hotel a 3-star hotel and today we have inaugurated the 4-star Crowne Plaza Duqm. We aim at providing quality accommodation for the residents of this area and for investors looking for opportunities here\', Wael al Lawati, CEO, Omran said.
Omran is planning to diversify its kitty of projects into, besides hospitality and accommodation, entertainment activities utilising the historic destinations, according to Al Lawati.
\'The platform is now set and we are into aggressive marketing programmes. Our \'Duqm Calling\' programme to attract investors will happen this year too. We are in talks with our stakeholders and Oman Air which is flying three times a week. We are planning to open new destination for families to come and enjoy Duqm which will materialise soon\'.
Yahya bin Said al Jabri, Chairman of the Special Economic Zone Authority at Duqm (SEZAD) added, \'From the onset, Omran has been actively supporting SEZAD in transforming Duqm into a leisure endpoint and competitive business platform.

We are pleased to see major projects such as the Crowne Plaza Duqm come to life, further positioning the wilayat as a logistics centre on the Arabian Sea, a safe investment haven in the region, and a modern and attractive businesses environment and tourism destination.\'