Heads of Diplomatic Missions in the Sultanate Visit Duqm Area 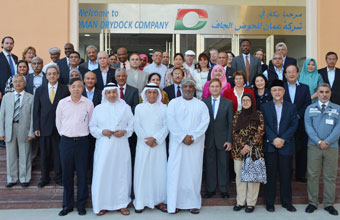 The Foreign Ministry in cooperation with the Special Economic Zone Authority at Duqm (SEZAD) organized a visit to a number of Heads of Diplomatic Missions accredited to the Sultanate and their spouses to the Duqm Economic Zone. The group included 59 participants from various Arab and foreign countries and representatives of international organizations.
The program of the visit includes a two-day tour of the Dry Dock Complex, A\\'Duqm Port, and A\\'Duqm Airport and to see presentations about SEZAD.
It is planned that the visit program of tomorrow (Friday) would include a cruise on board of Fulk Al Salamah yacht and spend an Omani night on the A\\'Duqm beach in the tourist area.
Yahya bin Said al-Jabri, Chairman of SEZAD Board of Directors said in a speech that \\'We strongly believe in the significance of commercial and economic cooperation between the countries in achieving healthy economic growth rate, promote trade and investment links and to disseminate the spirit of goodwill, courtesy and love among people despite of the language and cultural variances.\\'
He added that many countries engaged in bilateral and regional economic schemes to promote the free trade among them, and create common markets, and benefit from the economy of scale, as well as enhancing the capacity and partnership to national and regional platforms to open the door to foreign direct investment and maximize the use of the comparative advantages of one or more available in the framework of joint cooperation.
Chairman of SEZAD Board of Directors added that \\'The Special economic Zone at Duqm, is one of these economic system, with several comparative advantages, that can be utilized in achieving a comprehensive and balanced economic development, with a total area of 1,777 square kilometers, capitalizing on its distinguished strategic location on the Arabian Sea, its existence near to the enriched natural sources of crude oil supplies in GCC region, the availability of raw materials and abundance of fishery resources alongside of the Governorate of Al Wusta coastline, in addition to the beauty and natural heritage in the region.\\'
He also said that the government has prepared the basic required infrastructure & public facilities, such as the commercial port, the airport and power and water desalination substations to support potential investors exploring investment opportunities in A\\'Duqm SEZ and to qualify the region as the best place to live, work and relax.
For his part, Sheikh Khalil bin Ahmed al-Salmi, CEO Deputy for Dry Dock said the dry dock in its strategic location overlooking the Arabian Sea, is a unique station for service to vessels travelling to and from international markets, especially oil and gas tankers, in addition that the visit of the Heads of Diplomatic Missions accredited to the Sultanate is an important step in the field of international marketing and promotion as the company prepares an annual marketing plan to visit countries related to maritime activities, such as those in Europe and East Asia, adding that through this visit, the delegation would closely view the dry dock services and the visit would result in many long-term benefits.