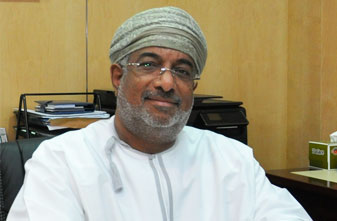 Yahya Al Jabri:
His Majesty Sultan Qaboos has worked throughout the 44 years of the blessed renaissance toward the prosperity of his people and the development and stability of the Sultanate.

We will work to implement His Majesty’s directives to make the Special Economic Zone at Duqm one of the pillars of economic diversification.

H.E. Yahya bin Said bin Abdullah Al Jabri, Chairman of the Board of Directors at SEZAD (Special Economic Zone Authority at Duqm) expressed his overwhelming happiness to hear the statement of His Majesty Sultan Qaboos Bin Said – Allah save His Majesty – to his loyal people on the occasion of the 44th National Day, asking Allah to bless His Majesty with everlasting health.

H.E. added in a press release that this speech is a message from a leading father to his loyal subject, and that it expresses His Majesty’s keenness to engage all of us in the national responsibility that is required to maintain what has been achieved in this prosperous era, to work hard in service of Oman and its people, and to do the utmost sincere work to our beloved country.

H.E. confirmed that His Majesty Sultan Qaboos Bin Said – May Allah protect him – has worked throughout the 44 years of renaissance toward the prosperity of his people and the development, safety and stability of the Sultanate, which has become, under his wise patronage, a modern country where we enjoy security, safety and peace of mind. The Sultanate, has also become a country of peace, through pursuing genuine principles laid down by His Majesty, who has always, since His Majesty’s ascend to the Throne, given his people and country his utmost care and attention. Moreover, His Majesty has spent his life and efforts to build our beloved country,  brick by brick, and to care for his people’s prosperity and happiness.

H.E. said that, today, we are proud of what has been accomplished in this land in terms of renaissance, prosperity and stability, and that we will work to implement His Majesty’s directives, and wise vision to make the Special Economic Zone at Duqm one of the pillars of economic diversification.

H.E. Yahya Al Jabrioffered, in conclusion, his congratulations to His Majesty and to the Omani People on the 44th Naional Day, asking Allah to repeat this joyful occasion and for Oman to witness successive achievements under the wise patronage of His Majesty. He also said that we pray to Allah to give His Majesty health, happiness and wellness, promising His Majesty our honest and dedicated work for the benefit of Oman and its people.