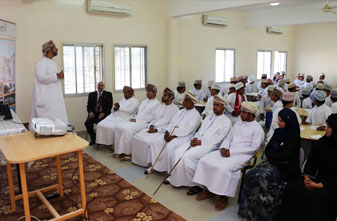 Community Development Committee at SEZAD kicked this morning the 10th of November, the Entrepreneurship Program “Innovation Camp” which is supported by Duqm Refinery as part of its social investment program and executed by Injaz Oman. The program will last for 3 days.

The program held under the theme of “Innovation Camp”, and targets school students in Duqm and is expected to benefit more than 600 school-students from different schools in the wiliyat. The program includes a number of interactive training workshops, which aim to enhance the spirit of entrepreneurship among the students.

Ismail Al-Balushi, Executive Vice President and Chairman of Community Development Committee, said that the entrepreneurship program is one of the programs that the committee is implementing within its efforts to promote the culture of entrepreneurship among school-students. He expressed his hopes that these training workshops would explain many entrepreneurship-related concepts to the students.

Al-Balushi confirmed in a press release the importance of such programs in shaping the skills of the students, enriching their knowledge in entrepreneurship and preparing them to enter the labor market, especially in light of the projects that are being set up now at SEZAD, which would provide many opportunities to these young students which they can exploit.

The Executive Vice President Indicated that the Committee of Community Development at Duqm SEZ has implemented during this year several community service programs. He also explained that the English Language Teaching Program, which was inaugurated towards the end of last October, has received a vast interest from students and employees at SEZAD.

On his part, Shabib Mamari, Managing Director at Injaz Oman, said that the “Innovation Camp Bag” consists of a 4-hour training workshop that defines the necessary skills needed to set up entrepreneurial projects, and it would encourage students to think about setting up commercial projects as a professional choice of the future. Indicating that this concept is realized through introducing students to stakeholders that would provide their visions, expertise and achievements.

Duqm Refinery support reflects the company’s commitment towards the development of local community. It is worth to mention that Duqm Refinery project is one of the major projects at SEZAD, and that it will be a starting point to transfer Duqm into one of the biggest industrial and economic hubs in the region.

Today’s training workshops addressed a number of exercises related to the innovation in setting up commercial projects, persuasion skills and the characteristics of entrepreneurs. A number of success stories of entrepreneurs were presented.