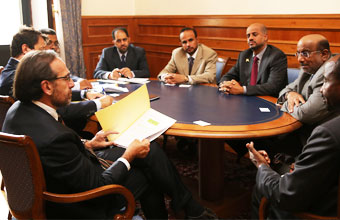 SEZAD Chairman explores possibilities for attracting Italian investments
H.E Yahya bin Said al Jabri, Chairman of Special Economic Zone Authority of Duqm (SEZAD) held two meetings today, on Tuesday 23 September 2014, with Carlo Calenda, Deputy Minister of Economic Development and Riccardo Nencini, Deputy Ministry of Infrastructure and Transport in Italy and discussed with them means of enhancing bilateral relations.
The meeting also touched on a number of economic issues especially those related to attracting Italian investments to the Sultanate.
During the meeting. H.E Al Jabri highlighted the wide range of incentives and benefits provided to investors in SEZAD. He added that SEZAD is an endeavor made by the Sultanate within its plan to diversify sources of national economy. He said that the Zone has potentials that qualify it to attract major investments in a wide range of sectors. The Zone includes an airport, strategic port, Drydock for ship repair, logistic areas, heavy, medium and light industries complex, and tourist, residential and business areas in addition to an integrated package of incentives, benefits and facilities for investors.
He also underscored the conducive and investor friendly business-environment in the Sultanate as well as its strategic location. He affirmed the Sultanate\'s government keenness to enhance bilateral ties with Italy in all fields especially in economy, business and investment. While al Jabri praised the high-level relations between the two countries, he highlighted the need to enhance the reciprocal trade and joint ventures between investors from both countries.
The two Italian officials expressed their esteem for the Sultanate and their keenness to promote economic and trade relations between the two countries. They also conveyed the Italian government\'s support for the efforts done to enhance bilateral ties in all fields.
The meeting was attended by Dr. Ahmed bin Salem ba Omar, the Sultanate\'s accredited ambassador to the Republic of Italy, a number of officials at the Omani embassy in Italy and SEZAD.
The meeting comes at the onset of the promotional campaign \'Duqm Invites You\', organized by SEZAD in Rome from 22-26 September in a bid to attract Italian investments to the Zone.

It is worth mentioning that SEZAD in collaboration with the Sultanate\'s embassy in Italy will organize tomorrow (Wednesday 24 September) an awareness seminar about the incentives and benefits provided to investors in SEZAD. The seminar includes presentations by representatives of SEZAD, the Ministry of Agriculture and Fisheries, the Public Authority for Investment Promotion and Export Development \' Ethra\'a\', Oman Dry Dock Company, Duqm Port Company , Oman Oil Company and Duqm Development Company. This promotional campaign aims at raising awareness of the investor-friendly business environment in the Sultanate, attracting Italian investors and benefiting from the Italian experiences in economic and free zones field.